Report on the Sexualization of the Brazilian Identity

Race. This single word connotes a plethora of images and meanings. While much progress is taking place around the world in regards to race and its resulting implications, differences between races still exist in a sort of “racial hierarchy”. This “racial hierarchy” is seen throughout the world in different forms. Erica William’s book titled Sex Tourism in Bahia explores one specific usage of this term. Chapter Two, Racial Hierarchies of Desire and the Specter of Sex Tourism, focuses on the “racial hierarchy” of women involved in an active or passive form in sex tourism in Bahia. On one end of the spectrum, are the white woman, which is still often considered the “standard of beauty” in Brazil (Williams, p. 45). On the other end of the spectrum are the African/Black women, who are often considered the “standard of sensuality” (Williams, p. 45). Mulatas fall somewhere in the middle, but are considered the ultimate and “national erotic icon” (Williams, p. 48).  A mulata is believed to embody “the male sexual fantasy of uniting the white woman’s respectability with the black woman’s stereotypical lubricity and powerlessness”, essentially possessing the best of both worlds (Williams, p. 48).

Brazil, known as the “land of samba and sensuality” (Kingstone, 2004), has used the eroticism “embodied” by the mulatas to its advantage. The service sector of the country, which heavily relies on the tourism industry, represents up to 70% of the country’s GDP (World Bank, 2015). The Travel & Tourism Competitiveness Index  evaluates Brazil’s strengths as a tourist destination. The success of the tourism industries in Brazil result from the combination of the country’s natural landscapes and culture with the mulata women, often in skimpy clothes or bikinis. While this does attract tourism and economic opportunities, albeit a very specific type of tourist, the locals have mixed views. Our personal experiences with Brazilian culture and people shed some light on the conflicting opinions regarding the perceptions created by the use of mulatas to promote tourism. For example, Emily has have been working at a women and children’s homeless shelter for the past couple of months, and one of the mothers is from Brazil. When she asked her about her experiences in Brazil, before even bringing up the topic of William’s book, she commented on all the postcards. She described the plethora of postcards that were in constant circulation, and how these postcards placed stresses on her and her female friends to look, dress, and act a certain way, like the mulata women of Brazil. Daniela in her Portuguese classe learnt about the culture, geography and demographics of Portuguese speaking countries. The northeast region of Brazil is known for its African/Black culture and religions such as candomble and syncretism elements. Bahia located in the northeastern region concentrates the most dense population of mulatos outside Africa (Hutchinson, 2013). These features are strongly rooted in Bahia’s stereotype and influence foreigner’s relations with locals as Dr. Williams explains too. 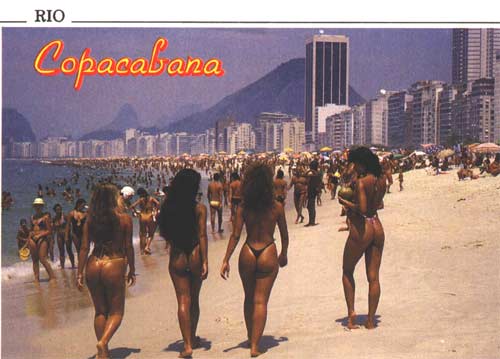 An additional example of Brazil using mulata women and the concept of sex to its advantage can be seen through merchandise centered on large-scale events. One notably tasteless example provided by Dr. Williams during the discussion were men’s Adidas World Cup t-shirts. Adidas suspended the sale of the t-shirts as Brazilian authorities accused the brand of sexualizing the country’s image. The design incorporated a curvy mulata woman in leaving little to the imagination, hinted the possibilities of engaging in sexual acts with mulatas and recognized “the centrality of the butt in Brazilian aesthetics” (Williams, p. 45).

The Institute of Brazilian Tourism (Embratur) reminded Adidas, an official FIFA sponsor, that it stands against the sale of products “that link Brazil’s image to sex appeal” (BBC, 2014). However, Adidas defended itself by saying it “always pays close attention to the opinion of its consumer and partners” (BBC, 2014). Brazilian President Dilma Rousseff reacted with a statement welcoming tourists to the World Cup. However, Rousseff recalled that Brazil does not tolerate crimes such as “sexual child and adolescent exploitation” (BBC. 2014).

During the discussion Dr. Williams did not provide our class with great concrete examples and evidence on certain topics. However, during this part of the discussion, regarding “racial hierarchy” and the relationship between mulatas and tourism, was very interesting and well-researched. Dr. Williams demonstrated the importance of her studies in current events such as the FIFA and Adidas example explained. A follow up question was whether or not this same situation was happening surrounding the upcoming Olympics in Rio this Summer 2016. Dr. Williams responded that due to massive chaos occurring in Brazil from this past year, less attention and emphasis has been placed on the upcoming games. However it is interesting to note, who is buying these t-shirts? Are females, males, tourists, soccer fans, or a combination buying these t-shirts. Additionally, this paints a clear picture of how particular aspects of Brazilian culture are focused on a world-wide scale.

Brazil’s exoctiness was once created to steer attention away from Vargas’s populist dictatorship (1930-1945). The country’s tourism was then focused on beaches, samba and las mulatas. Brazil started capitalizing on the mulata figure as it was widely used to promote tourism. The women of African descent became the protagonists of advertising campaigns, postcards, etc. Their “standards of sensuality” was used to appeal tourists to visit Brazilian’s destinations of pleasure. The government and the tourism industry helped consolidate this icon internationally. In the last recent years, Brazil has been trying to distance itself from those sexual stereotypes. However, Adidas’ designs reflect customer’s’ identity of Brazil and what they look for in their destination: sexual encounters. The majority of the sex campaigns issued by the government are against sex with children since prostitution was legalized in 2002. As adults are protected by the law, its regulation and prosecution have decreased. So, has child prostitution steered away the attention from sex tourism?